Mortgage base rates back to historic low 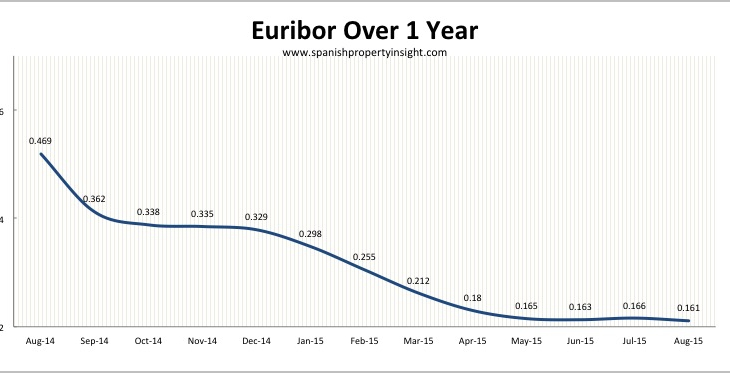 After a small blip last month, Euro mortgage base rates have headed back down to a new historic low as lending expands in Spain, giving the Spanish property market a boost.

12-month Euribor – the rate typically used to calculate mortgage repayments in Spain – fell to a new low of 0.161 in August, a percentage decline of 3% in a month, and 65.7% in a year, reducing monthly mortgage payments for many borrowers in Spain.

With Eurozone base rates at 0.15, and Euribor at 0.161, there is not much room left for Euribor to keep going down.

Last month, when Euribor rose a fraction, analysts attributed this to events in Greece creating worries about the common currency, but since then much bigger events in China have driven Euribor back down again to an all-time low, down 97% from its peak in 2008.

New mortgage lending in June rose by 32%, according to the latest data from the General Council of Notaries (and by 26% according to the National Institute of Statistics) so increasing numbers of buyers in Spain are taking advantage of record low mortgage rates to buy homes that have crashed in price since the peak, and now look to be bottoming out. This partly explains why Spanish home sales rose 19% in June.

New mortgages in Spain are now cheaper than the Eurozone average, for the first time in a year and a half, according to analysis by the European Central Bank. The average new mortgage signed in Spain in July had an interest rate of 2.12%, better than the Eurozone average of 2.22%, and only slightly above the average rate in Germany of 2%, all according to figures from the ECB.