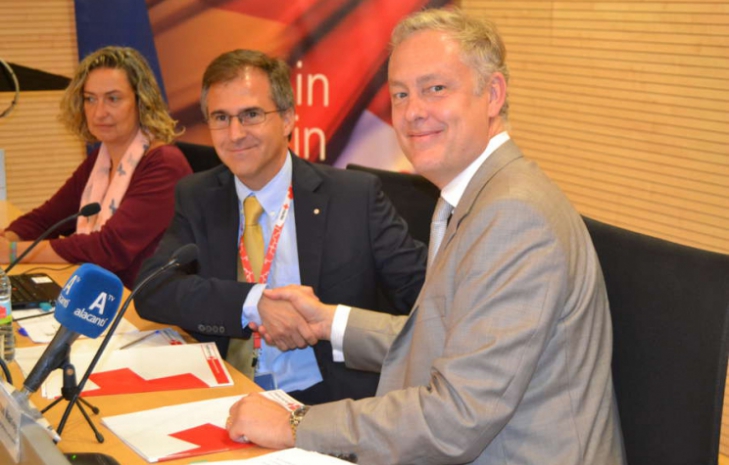 AN innovative and somewhat ground breaking agreement has been made between the British Embassy and the Cruz Roja aimed at bringing the two together more closely for the benefit of all.

Signing the partnership at the headquarters of the Red Cross in Alicante with national vice-president of the organisation, Javier Gimeno, the British Ambassador Simon Manley, said this was a “very important moment” as it was the first time the Embassy had made such an agreement with an NGO but it offered “an exciting opportunity for collaboration.”

The move will mean that British people living in Spain will have easier access to the services and support of the Red Cross thanks to the cooperation agreement. Whilst it will operate on a national level eventually, with plans for it to be in place in Malaga and Tenerife next year, it is being launched and piloted in Alicante where the Red Cross has a large leading presence and equally where there is a substantial expat population.

Consul Sarah-Jane Morris said: “This area has the most intense and dynamic sense of groups so we felt it was the perfect place to launch as we are looking at getting all the ideas here to then roll them out.” Representatives from a large number of English language associations and charities were present at the announcement of the agreement before being invited to a round table discussion to voice their ideas and opinions on what could be done and what is needed to help more communities.

Simon Manley said: “People in the British communities have a wealth of experience and skills, and I really hope that this new partnership with the Red Cross will encourage more people to volunteer their talents and support for the benefit of others. The agreement will also help to ensure that British expats in the Alicante Region have easier access to the wide range of Red Cross resources, which can improve their quality of life.”

Javier Gimeno added: “We have identified a large number of British people in our province that, because of their age and health, may require Red Cross services such as adapted transport, accompaniment and home telecare. Our aims are to inspire members of the British community to volunteer for the Red Cross and to encourage those who require assistance to take advantage of our services.”

Already actions have begun including beginning to translate the Red Cross information into English.

The Red Cross currently has 200,000 volunteers in Spain and 8,000 in Alicante Province and it is hoped with this new collaboration that more volunteers in the expat communities will come forward and volunteer their time and help support the most vulnerable.