Reminder: don´t pop to the shop in your flipflops 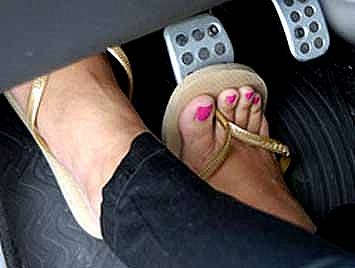 It’s tempting to pop down to the shops in your flip flops, but don´t do it

The Guardia Civil have issued a reminder for all those in the holiday spirit that driving in flip flops or slip-on shoes is not only downright dangerous, but could lead to a fine if it is deemed to be a contributing factor in a road accident.

As tempting as it is to pop down to the shops in household footwear, don´t do it, as feet can easily slip on pedals or become entangled, so only shoes with an enclosed structure which securely envelop the foot should be worn when driving.

This also relates to driving barefoot and also wearing high-heeled shoes when driving.

The penalty for driving in footwear not considered to be “adequate” is 200 euros should the penalty be applied.

Reglamento General de Circulación, article 3.1 does not specifically describe the type of footwear considered to be adequate, but is generally applied to relate to "negligent or dangerous " driving. If you have been involved in an accident and are found to be wearing inappropriate footwear for driving then this is the article by which you will be sanctioned.

There has been a great deal of debate generated by this subject and several readers have confirmed that they themselves, or friends, have been fined for wearing flip-flops when driving.

It's very much a situation of this is not illegal should the letter of the law be applied per se, but can be applied should the officer consider that it is causing an individual to drive in a dangerous or negligent fashion.

At the end of the day, driving in flip flops is DANGEROUS, can cause an accident, people have been fined for wearing them while driving and the most sensible piece of advice is to wear shoes which are appropriate for driving and will not contribute to an accident.