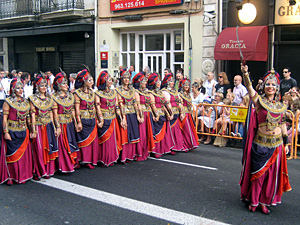 The 9 de octubre celebrates the Region of Valencia Day, but also the feast of San Dionisio, traditionally considered the saint patron of lovers. During this day as custom marks, men gives their sweethearts a silk scarf which has inside a delicious assortment of sweet marzipan. A tradition known as Mocaorà.

The events planned for the Region of Valencia Day include a previous show, a Fireworks Festival held at midnight on 8th October. The next day, as every year, the Bajada de la Real Senyera (the Descent of the Royal Flag) from the Municipal Historical Museum will open the festive day. From this place a civic procession starts toward the Metropolitan Church Cathedral Basilica of Santa Maria. Then the procession will stop to make a floral offering at the statue of the Rey Jaume I (King James the First) and then it continues towards the Town Hall.

Later, a terrestrial Mascletà will be shot and a Dansà Popular will take place at Plaza de la Virgen at 4 p.m. Then, the Festival de Balls, Música i Cançons Valencianes will be held and finally, at 5 p.m., the Entry of Moors and Christians Ciudad de Valencia will fill with colour every corner of the city of Valencia.