ANOTHER SUCCESSFUL POPPY APPEAL FOR THE RBL 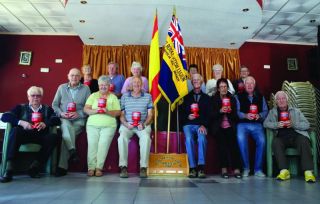 During recent weeks we’ve all seen those red boxes in bars, restaurants and many other businesses, collecting for the annual Poppy Appeal that raises much needed funds for ex-servicemen and their families here in Spain, who might be in need of aid.

Whether that is directly financial or perhaps emotional; The Royal British Legion is there to help. And what a great job they have been doing once again, particularly locally, here on the Costa Blanca South.

Not only when we see them on the streets, do we remind ourselves never to forget, but all year round, as well as in the run up to Remembrance Sunday, volunteers are working hard, either helping with fundraising or doing something else to help the cause.

At the Gran Alacant and La Marina Branch we spoke to Branch Treasurer Brian Hunt to see if the current campaign was as successful as those held in previous years. Unfortunately it was at a difficult time, he was in the process of moving house, although he was keen to explain that all the fundraising has been completed and all that is left is the count itself.
In 2014 the total raised was almost ten thousand euros so the branch is hoping that this year’s final total will break the 10k mark.

Of course the efforts of those magnificent fundraisers has been going on all year long. No sooner is the money counted from the November Appeal than it is banked and transferred to the main account held by Spain District North, and then it all gets underway again.

Brian was keen to point out, that all of the funds raised in Spain stay in Spain to help beneficiaries who live here, with 91% of all the monies going directly to help ex-servicemen and women, and just nine cents in the euro going toward administration.
The Torrevieja Branch is blessed by rather more members than La Marina and Gran Alacant so their aspirations are much greater. In 2014 the branch raised 18,000 euros although Chairman Gerry Lynch explained that local efforts took a major knock recently with the closure of the Municipal Theatre and the cancellation of the planned Armistice Show.

However with 11k already in the pot prior to the count, which took place at the Casa Ventura on Sunday, he was hopeful that the end result will be pretty similar to 2014.

Over 3000 euros has been raised from the collections at Iceland Torrevieja and with monies already safely banked from Burns Night, a race afternoon, the Annual Poppy Ball, lunches and various raffles that final figure is not too far away. “We are also waiting to find out how the Footlights Theatre Group fared with a recent production, a large chunk of the proceeds from which are Torrevieja RBL bound.

Similar efforts have also been taking place throughout the year at the Orihuela Costa Branch where the new Poppy Appeal Coordinator is Eddie Coleman.

Eddie told me that the branch had raised 10,666 euro to the end of October, from a variety of different events and functions including appeals at the Emerald Isle over St Patrick’s and St Georges Days, Easter Sunday lunch, Royal Ascot Ladies Day, branch raffles and especially the VE Day and the Playa Flamenca Fun Day both held in May, which raised over 2k.

There was also over 4k raised through the numerous book stalls that the branch has out in local bars, 1000 euro from the recent Remembrance Choral Concert organised by Nigel Hopkins and the regular and extremely important funding from local golf societies, the Poppy Golf events organised by Mick ‘The Grip’ Reeves, but with a number of societies still to declare their final golfing total is still unknown.

However, following the Poppy Appeal count which took place a week ago, the total sum raised by the Orihuela Costa Branch to date, currently stands at 31,000 euro, and this with a number of benefactors still to hand in their monies.

Here in Spain the funds collected are consolidated by the District North offices, from where they are allocated to the support and welfare of veterans and their families living in Spain. This can include vital medical equipment, hearing aids, wheelchairs, glasses, mobility scooters, food or anything else required for their immediate support.

All applications for help are income and savings related, to ensure the neediest are dealt with first, but the RBL will reply to any call for assistance within 3 days.

Branches are also training more welfare case workers all the while, with volunteers who generously give up their time to work with the many brave souls who gave, and continue to give, so much for us all.

And once again, testament to our local branches, Gran Alacant/La Marina, Torrevieja and the Orihuela Costa, where once again their fundraising activities have been carried out extremely professionally, with the minimum of fuss and with the maximum of support from both within and without the three branches.

An amazing achievement. Well done to everyone involved.