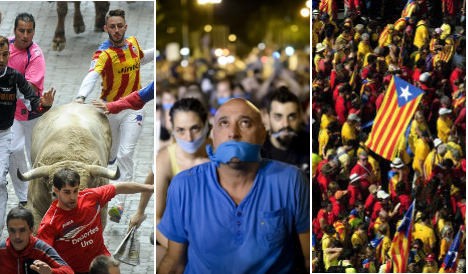 From a clamour for Catalan independence and the hottest summer ever to the death of the two-party system and siestas becoming compulsory, it has been a busy year for Spain...

On March 24th a Germanwings fight left Barcelona heading for the German city of Dusseldorf, but crashed when its co-pilot deliberately made the plane plunge into the French Alps.

We saw grief-stricken families arrive at Barcelona airport desperate for news of their families and heard of the Spanish school children who were in shock after just waving off their German exchange partners – a whole class of whom were on the flight.

All 150 passengers died in the flight, including 50 Spaniards. Spain's King Felipe and Queen Letizia attended a memorial service for the victims in Barcelona's famous Sagrada Familia cathedral in April.

The election of Madrid mayor Manuela Carmena ended a 24-year run for the conservative Popular Party in the Spanish capital. Carmena spurned the official mayoral car, preferring to take the metro to work and said thanks-but-no-thanks to a host of freebies such as the prestigious mayoral box at Madrid's Las Ventas bullring - all in the name of making important savings.

In Barcelona, anti-eviction activist Ada Colau became mayor and immediately began a series of reforms, including giving herself a pay cut and putting curbs on Barcelona's out of control tourism.

On July 1st Spain's citizen security law - dubbed the "gag law" by critics - came into force to nationwide protests. The law imposes fines for protesting outside public buildings and taking photos of police officers, which critics say severely limit freedom of speech and affect the work of journalists. Within days of the law being introduced the first fines were doled out. One man in the Canary Islands was fined €600 for calling his local police lazy on Facebook, while a woman was fined €800 for posting a photograph of an illegally parked police car onto social media.

A deadly summer of bull running

At least 12 people were gored to death during bull running festivals around Spain during the summer of 2015, making it one of the deadliest years on record and leading to increased calls for bull running to be banned.

A man in his 60s became the 12th to be gored during the bull running festival in the central Spanish town of Cuéllar.

Spain saw record tourism numbers in 2015, in part benefitting from unrest in countries like Turkey, Egypt and Tunisia - the latter where a Spanish hotel was targeted in a terror attack in June.

Spain registered 60 million foreign visitors from January to October, putting it on track for a record-breaking year.

But not everything was rosy for the tourism industry. British police officers flew out to Mallorca to join Spanish police in the party hotspot of Magaluf in an attempt to control rowdy British tourists, while new Barcelona mayor, Ada Colau, imposed new curbs on tourism in the city after it struggled to cope with the rising tide of visitors.

Spain experienced record temperatures in 2015, including three heatwaves that made the summer stand out as the hottest ever recorded.

Many Spanish provinces were put on alert because of the high temperatures, while firefighters battled raging wildfires in Catalonia and elsewhere in Spain. Those fires drove over a thousand people to be evacuated from their homes.

While in much of Spain the old cliché of the siesta is more or less dying out, one town is proudly championing the right to an afternoon snooze... in fact, this year it even made it obligatory.

This summer the mayor of the town of Ador, in Valencia, enshrined in law his citizens' right to an afternoon nap.

Mayor Joan Faus Vitòria ordered the town's inhabitants to stay quiet between the hours of 2pm and 5pm, which meant no football for the children and no animals barking in the streets.

On September 27th the north-eastern region of Catalonia went to the polls in a regional election that was dominated by one issue above all others - independence. A pro-independence coalition won the most seats in parliament despite failing to secure 50 percent of the vote.

Separatists vowed that a strong showing in the election would herald an 18-month "roadmap to independence", but the post-election landscape of Catalan politics was far from clear, as the CUP, a far-left kingmaker in the coalition, refused to support Catalan president Artur Mas for another stint.

As the year draws to a close it is still far from clear if a government can be formed and if no agreement is made by January 9th new elections will have to be called.

The Spanish general election was held on December 20th, and marked the demise of Spain's two-party system, as two young parties made huge inroads on the country's political scene.

The ruling Popular Party won the most votes but were still dealt a crushing blow; losing 60 seats and falling well short of an absolute majority in parliament. But the socialist PSOE suffered their worst performance ever coming in a weak second place with just 90 seats.

Newcomer leftist Podemos were among the real winners of the evening, as were women – more women than ever before were voted into the Spanish parliament, including the country's first ever black MP.

Centrist party Ciudadanos may not have met expectations but still secured 40 seats in the national parliament.

Mariano Rajoy is scrabbling to form a government, but with opposition parties so far refusing to lend their support, he faces a very unsure vote of confidence in January.

As Spaniards celebrate the start of 2016 with a grape for each strike of the clock at midnight, they will have no idea yet what form the next government of Spain will take, who the next prime minister will be, or indeed if they may be asked to return the polls early in the new year.