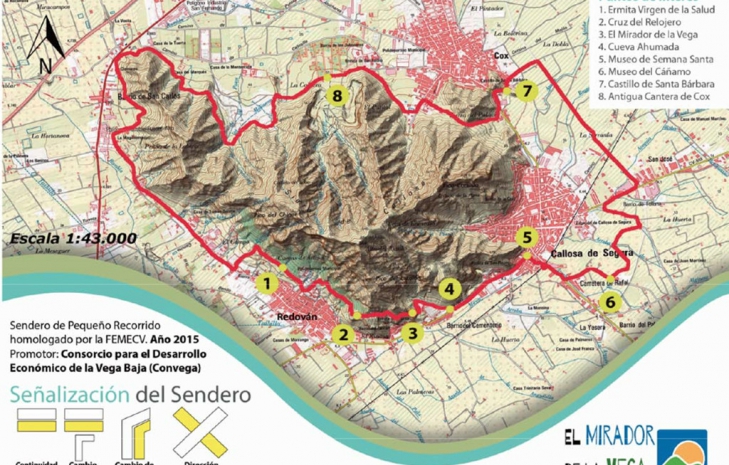 Trail passing through Redován, Callosa and Cox was prepared by employment training students

Last Sunday morning, January 31st a new hiking route was inaugurated, called El Mirador de la Vega (The viewpoint of the Vega Baja). It has been prepared by the students of an employment trianing workshop.

This is the second new route in the area to have been inaugurated this month, after the Caldera del Gigante route attracted 600 people to its opening last weekend and El Mirador has proved equally popular with all the places for the inaugural walk already taken. But this is no reason you cannot enjoy the beautiful views and nature at any other time.

The route starts at the Virgen de la Salud hermitage in Redován and takes a circular route about 20 kilometres long which also passes through the towns of Cox and Callosa de Segura. Along the way, walkers can also see the Bancalico de los Moros, a Bronze Age archaeological site in Redován; the Cueva Ahumada nature reserve and the museums of Semana Santa (Holy Week) and Cañamo (hemp) in Callosa; and the Castle of Santa Bárbara and the old quarry of San Isidro in Cox.

There is also wildlife to spot like the Eurasian eagle owl, Bonelli's eagle, common genet and Montpellier snake; and flora known in Spanish as the ash coloured cat's tail, rock thistle and Valencian tennis player.

It takes about six hours and 45 minutes to complete the whole route and has a difficulty level of 2 for the distance and 4 for the effort required, according to the MIDE system.

You can see full details of the route on the CONVEGA website athttp://www.convega.com/rutaelmiradordelavega.html