Muse, The Chemical Brothers and Massive Attack among this year's Benicàssim Festival line-up 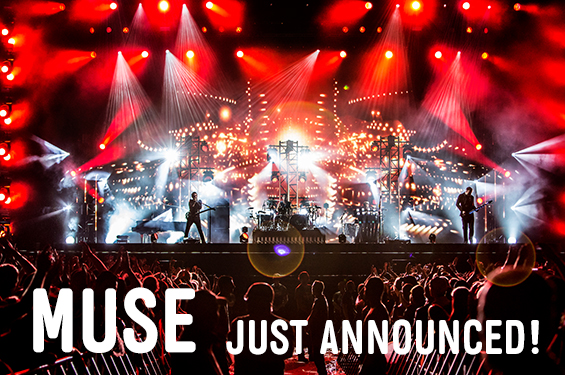 SPAIN'S answer to Glastonbury and the east coast's favourite 'mudbath' festival is set to include old-skool ravers and 1990s' pop-rockers from all over the world.

The Chemical Brothers, Massive Attack, Muse and Disclosure have confirmed their presence at the Benicàssim International Music Festival (FIB) on the Castellón province coast between July 14 and 17 inclusive.

Others on the programme include Kendrick Lamar, Major Lazer, The 1975, The Vaccines, Jamie XX and The Maccabees.

FIB's organisers, a British outfit behind such successful UK festivals such as T in the Park and Creamfields, say they are 'thrilled' to hear Muse (pictured above in concert in Barcelona) has agreed to take part, calling them 'one of the biggest bands on the planet'.

Formed 22 years ago, the foursome from Teignmouth, Devon (UK) with their hard rock, space rock and New Prog styles based upon their unique personal interests – astrophysics, life on other planets, human thoughts and space revolution – already have seven best-selling studio albums to their name including Origin of Symmetry,Black Holes and Revelations, and their latest CD, Drones – the subject of a world tour in 2015.

With six Q Awards, two Brit Awards, five MTVs and eight NMEs, plus four Kerrang! Awards and an American Music Award, Muse has been nominated five times for a Grammy and won the Best Rock Album prize in 2011 for their CD from two years previously, The Resistance.

They started out as support act for rock legends such as The Foo Fighters and The Red Hot Chilli Peppers, and ended up composing and performing the official track for the London 2012 Olympics, Survival.

Band members cite their musical inspirations as Nirvana, Rage Against the Machine, Pink Floyd, The Smashing Pumpkins, Jimi Hendrix, U2, Depeche Mode, Queen – and even classical master composers such as Franz Liszt, Sergéi Rachmaninov and Frédéric Chopin – although their style has been compared with that of Radiohead on a number of occasions.

The Chemical Brothers – also known as Tom Rowlands and Ed Simons – have spent 20 years redefining the idea of live electronic music and their spectacular special effects always make for a sensational performance, whilst Disclosure, or brothers Guy and Howard Lawrence will perform their trademark club anthems that have made them the epitome of avant garde in the new explosion of dance music to hit the UK.

Massive Attack's hypnotic and sensual fusion of hip-hop, moving melodies and club beats represent the soundtrack of the lives of an entire generation in the UK, whilst the high-octave rock of The Vaccines, the 'most exciting guitar band in Britain' Catfish and the Bottlemen, and the indie-pop blended with alternative R&B of The 1975 means the schedule for Benicàssim 2016 grows more tempting by the day.

Not all acts are British, of course, since although UK visitors are among the most numerous at Benicàssim, its public is always highly international.

Madrid-based quartet Hinds, said to be the most-global Spanish outfit currently on the circuit and whose début CD has been chosen as Album of the Month by British magazine NME, along with the nationally-successful groups and solo artists Soledad Vélez, Kero Kero Bonito, Perlita, and the Valencia-based band Ramírez Exposed have confirmed their presence in Benicàssim this summer.

And the long list of acts who are already definites is only a small slice of the action, says FIB's organisers – 'many more names' are still waiting to be added to the programme.