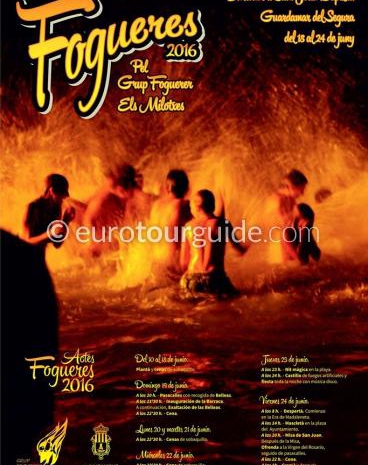 The traditional Fogueras will take place in Guardamar del Segura from the 10th to the 24th June 2016. The Hogueras mark the summer solstice and involve the making of large and intricate paper mache statues. These are placed in the streets for several days, then they are burnt in an event known as the 'crema'.

Planta or placing of the paper mache statues in the streets and plazas.

20:00 Parade to collected the Fiesta Queens.

21:30 Inauguration of the Barraca (party marquee) and the exaltation of the fiesta queens.

00:00 Firework display followed by partying at the barraca.

14:00 Mascleta in the Plaza del Ayuntamiento

20:00 Mass followed by the flower offering to the Virgen del Rosario.

01:00 Crema or burning of the statues followed by partying in the barraca.