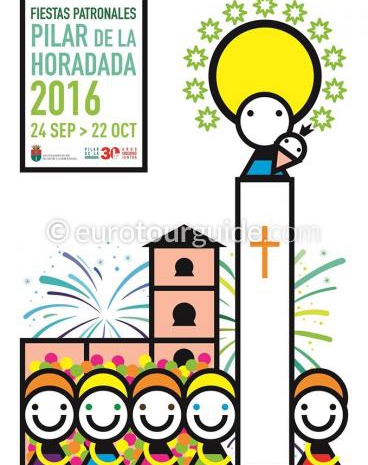 The town of Pilar de la Horadada will be celebrating their patron saint, the Virgen del Pilar, from the 24th September to the 22nd October 2016. The programme includes religious services, collectors fair, paella competition, a carnival parade and of course a firework display! The full programme is in the brochure below and the highlights are:

22:00 Election of the Fiesta Queens at the Carpa Municipal in the Parque Raimundo Benedicto

22:00 Coronation of the Fiesta Queens in the Plaza de la Iglesia

18:30 Music Band preform at the Carpa Municipal in the Parque Raimundo Benedicto

19:30 Parade by the groups, associations and the Union Musical de Almoradi from the Plaza de la Iglesia through the streets of the town

22:00 Release of the young bulls at the Bullring

17:00 Grand Prix, competition between the groups and associations in the Plaza de Toros

12:00 Ringing of the church bells and the firing of rockets in the Plaza de la Iglesia

19:00 Parade of the Music bands from the Plaza de la Iglesia to Calle Mayor

All day, special prices for the children at the funfair

10:00 Exhibition of Lace Making in the Plaza Campoamor