This Two Bedroom, End Townhouse in Benijofar is located just a 2 minutes walk from the popular and ever so sought after town square, where you can find some of the nearest amenities and facilities. Benijofar is a bustling area, next to Rojales & Quesada. From the property itself is just a 10 minute drive to the coast, Guardamar del Segura, award winning beaches... This...

This West Facing, Three Bedroom Townhouse in Benijofar in the heart of this so popular Spanish village; offering bars, restaurants, supermarket, pharmacy, banks, medical centre, school, sports ground and much more. With Quesada 5 minutes by car, La Marquesa golf course and the beach at Guardamar less than 15 minutes away, this is a perfect location and property for permanent living,... 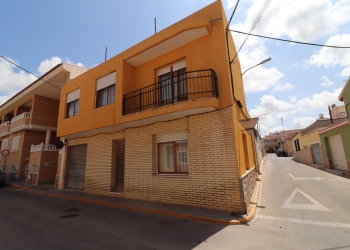 This Four Bedroom, Corner Townhouse in Benijofar is located in a fantastic town, literally 20 second walk from the town square, where you can find an abundance of amenities and facilities to choose from. A very popular area, just 10 minutes drive to the beautiful beaches of Guardamar del Segura too!!! This property built in 1970 comprises on the ground floor of a hallway as you enter,...

This Extremely Spacious, Three Bedroom Townhouse in Benijofar is located in one of the most popular villages in the Costa Blanca, between Rojales and Ciudad Quesada. Situated within a few minutes to many of the amenities and facilities on offer in this bustling area, whilst the beaches can be found just a 15 minute drive away at Guardamar del Segura. This property of some 158m2 comprises...

The sale of housing has skyrocketed. In March the best data was recorded in 6 years. According to the National Statistics Institute (INE), the purchase and sale of housing increased by 26.9% in March compared to the same month in 2016, to 40,461 operations, the highest figure since February 2011.

There is, however, a large difference between the March data and the February data, when purchases rose only 1.2%. Transactions on used homes increased by 28.3% in March compared to the same month in 2016, to a total of 33,100, a level that was not reached since September 2007.

14 consecutive months of year-on-year increases are in the pipeline.

In monthly terms (March over February), housing sales jumped 13.6%, its highest increase in a month in March in at least five years. The last month of March, the highest number of housing sales per 100,000 inhabitants occurred in Comunidad Valenciana (150), Baleares (148) and Andalusia (121 in both cases).

The Valencian Community, the third region in number of sales and sales.