Coast gets network of cycle lanes and pathways 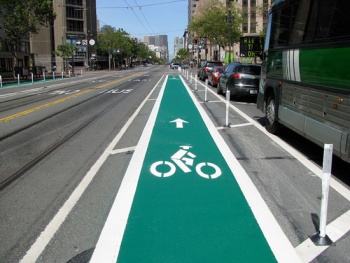 Orihuela Costa is to benefit from 6km of cycle lanes thanks to an unemployment initiative. Twenty-four unemployed people are working on the network of bike paths and walkways during the six month programme which ends in June.The Councillor for Promotion of Employment, Manuel Gallud, marked a key stage in the work schedule alongside the Councillor for the Costa, Beaches and International Residents, Martina Scheurer, and the technical director of the workshop, Miguel Angel Fernandez.

The 24 workers and the six people who make up the management team have been hired under a grant of 217,000 euros and a municipal contribution of 80,000 euros. Manuel Gallud said that the aim of this specific workshop is to ‘implement the Sustainable Urban Mobility Plan and connect different points of Orihuela Costa’ for cyclists. The councillor announced that although this workshop is still developing and at an early stage, there has already been an application for another job workshop to complete a second stage.
Miguel Angel Fernandez said that in this first phase the students are developing three sections. The first joins the bike path that already exists along the N-332 with the Aquamarina urbanisation. After crossing the Calle Fuego and the boardwalk, the path connects with the second tranche, which passes through the Cabo Roig and continues until the third section, which passes along the promenade of La Zenia. This lane is complete with fixed metal benches, each eight feet long. He explained that everything is now ready for the second phase, which will take the route towards Punta Prima and north of Orihuela Costa.
Martina Scheurer added that the council is also installing 25 bicycle parking places that will be placed along the bike path.

She said: We will offer a place for people to park their bikes; ideal for those cyclists who want to stop at one of the beaches located along the cycle lane.” As for the second phase, the Councillor for the Coast said that it is ‘important to link the bike path to other important locations such as schools, the civic centre or the Town Hall to offer a good network of paths that allow people to move without risk’.