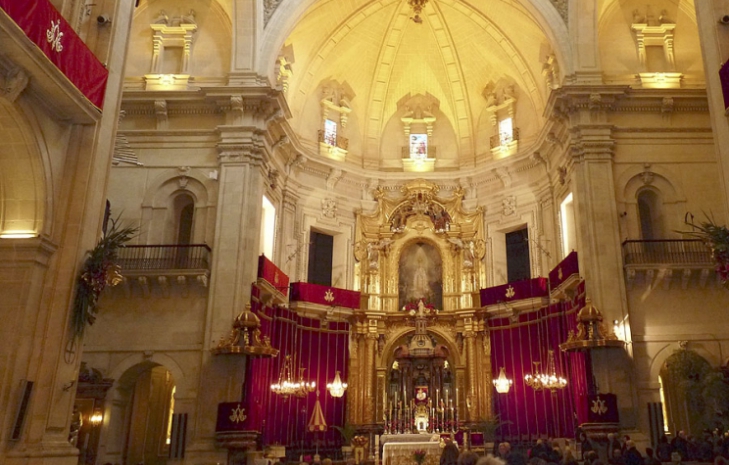 ELCHE’S Mystery Play, or ‘Festa,’ is a renowned theatrical performances.

The sacred musical drama depicts the death, the passage into heaven (known as the Assumption) and the crowning of the Virgin Mary and is performed every year in two acts on August 14 and 15 in the city.

The play, which has over 300 volunteers involved in it each year, is entirely sung in Valencian and some Latin and has been performed at the Basilica of Santa Maria for centuries, with its origins believed to date back to around the 13th century, although some historians say after studying the play, they would put its origins at nearer the 15th century.

The Mystery Play is also famous for its split-level stage with includes the vertical ‘celestial’ stage which descends from within the dome of the Basilica.

The play is part of the city’s identity and heritage and the perseverance and affection of the people of Elche have converted the Mystery Play into the last surviving vestige of performances of its kind.

In May 2001, UNESCO declared it a ‘Masterpiece of Oral and Intangible World Heritage’ making it the first Spanish festival to receive this award.

Evening performances of the ‘Vespra’ on August 14 and the ‘Dia de la Mare de Deu’ on August 15 are free to the public but due to the immense popularity of the play and the place it holds in the hearts of the people of Elche, it is advised to arrive several hours early to get a seat in the Basilica.

However, open rehearsals are held on August 11, 12 and 13 when the whole performance is concentrated into a single day. Tickets are now available to purchase for these rehearsals via www.instanticket.es costing from €5 or call the Casa de la Festa on 965 456 112.