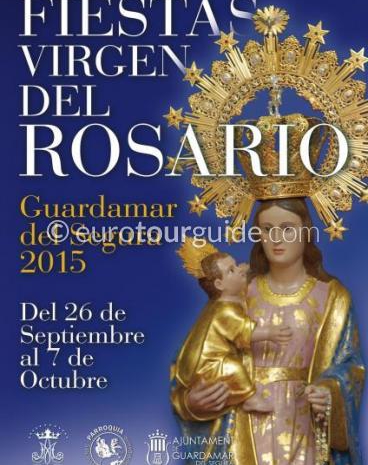 The town of Guardamar del Segura will be honouring the Virgen del Rosario from the 26th September to the 7th October 2015. The programme of the main events for the fiesta is:

Saturday 26th September
19:50 Solemn moving of the statue of the Virgen del Rosario from her Capilla to the Altar Mayor.

22:00 Inauguration of the Recinto Festero (fair ground) beside the town hall, followed by a Ballet Performance and Fashion Show.

Saturday 3rd October
11:30 Children's Games in the Plaza de la Constitución.
13:00 Ringing of the church bells and firing of rockets.
20:00 Mass, followed by the Flower Offering Parade along Avda. País Valenciano between calles Mediodía and Blasco Ibáñez, then the saying of the Rosary, a Ballet Performance, traditional Dancing and finally a firework display.
22:30 Partying in Plaza de la Constitución.

21:00 Classical Music Concert in the Church

19:00 Mass
20:00 Solemn Procession with the statue of the Virgen del Rosario, civil and military personal, members of some of the Moors and Christians companies, the fiesta queens and local bands. Route: Eng. Mira, Ausiàs March, Sant Eugeni, Miguel Hernández, Sant Francesc, Vicente Ramosa where they enter the church, followed by a speech by the Parish Priest and the singing of the Salve Marinera and the Virgen del Rosario Hymns, ending with a grand firework display from the Plaça de la Constitución.