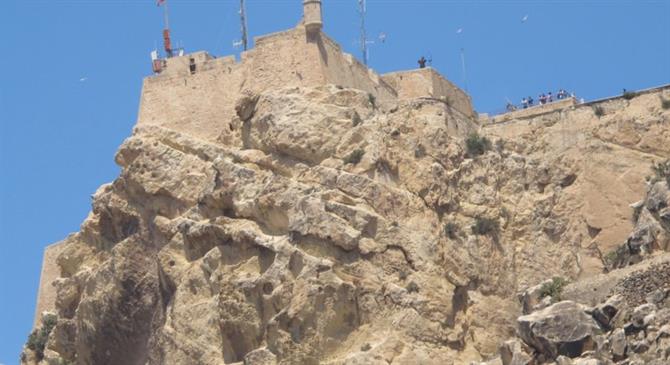 Spain’s cuisine, culture and architecture play homage to the country’s rich Moorish past.

For 500 years until the 13th century the Arabs ruled vast areas of Spain, including the Alicante and Costa Blanca region.

They bought exotic spices such as saffron and cinnamon. They cultivated citrus fruits, vines and rice which play a very important part in Spain’s gastronomy today. Even the iconic paella would not have been possible without the Arabic influence with rice and saffron being key ingredients in this tasty dish.

Many buildings, including castles, and place names are also evidence of a bygone age when the Moors ruled Spain.

The Moors also left behind many legends and fables, tales of romance, broken hearts, heroes and fairy tales involving princes and princesses.

Why is there a Moor's face on Alicante Castle?

One of the most interesting tales concerns the Moor’s face etched into the side of the Santa Barbara Castle in Alicante.

If you stand by Postiguet beach and look up to the tower on your left, beneath it you can see the rock formation looks like a man’s face.

Various legends have built up about this curious rock formation but the one most often repeated features star-crossed lovers and their heartbreak.

The tale involves a beautiful young princess called Cantara who fell in love with Ali. Her father, a Moorish king, disapproved and would not let his daughter marry for love.

A heartbroken Cantara, who could not bear to live apart from her loved one, threw herself off the castle on to the rocks of the Mount Benacantil and fell to her death.

Upon hearing the news, Ali also jumped to his death so he could be with his beloved in the next life.

His daughter’s suicide broke the King’s heart and he spent the rest of his days in misery and despair. It is believed to be his profile that is seen on the castle.

Certainly, the rock does look very much like a man’s face so it is possible to see how such a romantic tale could have been dreamed up.

The castle is worth a visit too as it’s one of the finest in Spain with plenty of other tales and fables to entertain visitors.

Tempting pleas from the Lady of Guardamar

Star-crossed lovers also feature in the legendary tale of the Lady of Guardamar.

In the Middle Ages, an Arabic princess called Zulaida falls in love with a Christian prince, Her father, the Moorish king, was outraged and banished his daughter to live forever at Cabezo Soler, next to the River Segura between Rojales and Guardamar.

Every year, on the night of San Juan, the princess appears and pleads for someone to rescue her by taking her to the river to break the curse.

As the man carries her, she becomes heavier and heavier. Monsters and dragons appear to try to stop the princess from getting to the river and the poor man faints in shock.

As he falls to the ground, he lets go of the princess and so she waits for another victim the following year.

Today you can walk alongside the River Segura to visit Guardamar's beautiful beaches.

Why almond trees flourish in Alicante

Another Romantic legend from the time of the Moors explains how almond trees were brought to the Alicante countryside.

In spring, many parts of the region but especially the Jalon Valley, are covered with trees bursting with pink and white blossom to create colourful orchards. The story goes that the trees were brought over to Spain to make a Queen smile again.

The folklore dates back to the time of the Moors when Sultan Ibn Almundin ruled across Portugal and parts of Spain.

He was a strong conqueror who won all his battles to control even more lands and to take their local folk as his slaves.

One slave was the lovely Gilda, who came from a cold, snow-covered land far away. The Sultan fell in love with his ice queen’s fair hair and blue eyes and decided to marry her.

After a while, Gilda grew sadder as her thoughts returned to her homeland.

The King wanted to know how he could make her smile again. He asked his poet who said the Queen was longing for winter so that she could see snow.

The Sultan, realising how impractical this would be in sunny Spain, ordered for thousands of almond trees to be planted around his castle.

When the trees blossomed they looked like the land was covered in snow and Gilda smiled.

This is the tale of why almond trees are in abundance in Spain.

The Jalon Valley is also famous for its award-winning wines.

Further south, in Orihuela, the female is the heroine of the hour when she saved her fellow townsfolk from certain death.

The Legend of Armengola in Orihuela has even been made into a film.

Armengola was the maidservant of Orihuela’s governor Benzaddon and had free access to his castle.

There was plenty of unrest between the Moors and Christians at the time and so Benzaddon decided to take drastic action – and kill all the Christian residents. However, he liked Armengola and wanted to spare her.

He let her in to his secret so she could be safe. However, the brave servant couldn’t bear to see her townsfolk slaughtered and leaked details of the cunning plot.

Two young men were dressed up as Armengola’s daughters so they would be allowed into the castle where they killed the guards and won control of the castle.

The cruel Moorish governor was killed in the battles and the Christians took back their town.

Orihuela is a beautiful historic town which you can stroll around to find out more about its rich past.

Another tale features bravery and battles between the Moors and the Christians.

A little further north from Jalon is the charming, traditional town of Alcala de la Jovada, near Pego. Many hundreds of years ago, the village was in the hands of a blue-eyed Sultan known as Al-Azraq.

He was born in the village and was a valiant leader, who opposed King Jaime I who was fighting to take over the Valencia kingdom.

The Sultan was killed in battle at Alcoy but the ‘blue-eyed one’s’ legend lives on in a brass fountain spouting fresh mountain water in Alcala de la Jovada’s main square. Just behind the town hall, there’s also a bust dedicated to Al-Azraq.

Each year many towns hold Moors and Christians fiestas to celebrate the times when the Moors ruled the land and the Christians conquered it once again. The fiestas involve fire powder, fire crackers and fireworks as running battles between the two factions are acted out in the streets.