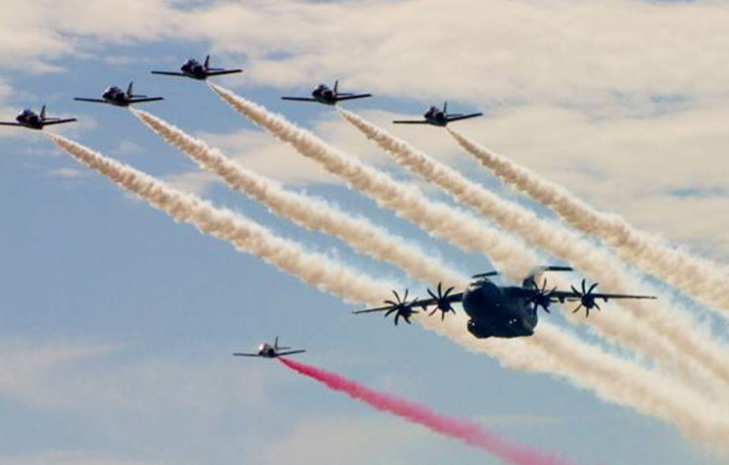 THOUSANDS descended on the Mar Menor at the weekend to celebrate the 30th anniversary of the Patrulla Águila acrobatic air display team.

To mark the occasion the doors were open to the public of the General Air Academy in Santiago de la Ribera on Saturday allowing people to see and view the aircraft up close and personal and find out more about the Air Academy and display team.

On Sunday, the crowds took to the beaches of the Mar Menor as the Patrulla Águila air force took to the skies of Murcia in a dramatic display of air agility and dance.

The Dornier and Bucker were the first to fly as the historical biplanes flew along the shoreline. Police helicopters and planes then livened up the crowds before the yellow amphibious Canadair gave a demonstration of its power and skill sliding down the sea surface and scooping up 5,000 litres of water.

A Harrier jet also made an appearance along with wing walker Ainhoa Sanchez who enjoyed a privileged open top view of the crowds below.

As well as the Patrulla Águila's dramatic display, including a surprise stellar formation flying with the new Airbus A400M Atlas, nicknamed the 'grizzly', the French Patrouille attended and showed why they are classed as one of the best units in the world with its formation of eight fighters.

Following the events of the weekend and a presentation at the General Air Academy, all the pilots of the Patrulla Águila, accompanied by Colonel Pablo Sanchez de Lara at the helm, moved to the City of San Javier to sign the Book of Honour of the City.