Vote to stay in EU 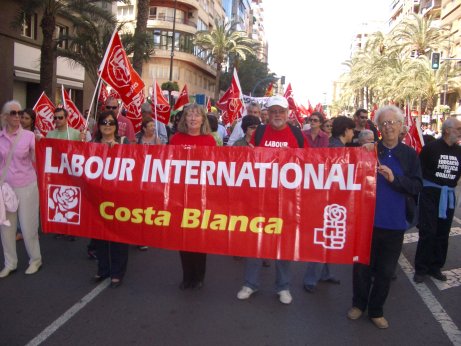 PRO-EUROPEAN LABOUR MP Mike Gapes warned that Britain leaving the EU would put the right to live and work abroad in “jeopardy”.

Speaking at a Labour International Conference in Alicante last Saturday, the MP for Ilford South urged delegates from across Europe to get expats to register to vote in the ballot and back the ‘remain’ campaign.

He said there were up to 2.5 million British people living and working in other EU countries – Spain having the largest population of UK migrants.“The British population living in other EU countries can make a difference,” Mike said. “I hope there will still be a change to allow everyone the opportunity to vote.”
The European Referendum Bill is currently before the House of Lords – and it is still hoped the franchise will be extended to enable those who have lived abroad for more than 15 years to have a voice.
“Those people living in Spain, which has the largest number of people living in the EU, in Portugal, France, or Italy, or anywhere, have the most interest in the outcome but many will not be able to vote,” added Mike.
“Labour International has a key role to campaign for the ‘remain’ vote and the ‘Britain Stronger in Europe Campaign’ getting people who are eligible to register to vote.”
And he said: “The fact that British people can live and work in other countries in Europe is certainly an argument here because it could be in jeopardy if we are outside the EU.”
Mike said expats also needed to get the message back to family and friends in the UK how there life abroad could be “damaged” – access health care, education, pensions, and buying and selling property could all be affected.

DESPOTSHe said he was “very sceptical, in fact, against” holding a referendum on issues of great complexity because people did not appreciate all the facts and tended to vote emotionally. “Clement Attlee described a referendum as a device for despots and dictators.”Prime Minister David Cameron had pledged a vote on membership before the end 2017after realising he was losing support to a growing UKIP, he said. “But there is a ridiculous and artificial timetable.”Mike said in 2017 there were general elections in France and Germany – who would not welcome a British exit at the same time – while the UK held the Presidency of the EU from July that year; restricting what ministers and Civil servants could say.
and he said 2016 also had complications for a ballot and Mr Cameron had ruled out holding a referendum at the same time as the London mayoral, Scottish Parliament and Welsh Assembly elections in 2016.“In my opinion, we would be likely to see a referendum in April, June or September 2016, hence the urgency for expats to sign up for their vote as soon as possible.”He said the referendum would be won or lost based on how effective the campaign and turn out to vote was. “Those who are fanatical will turn out to vote.“Those fanatical about coming out of Europe will come out and vote; those angry at the Conservatives will come out and vote to punish them; those fanatical to stay in the EU will come out and vote.“But most people are not in those categories. They will come out and vote if they are made aware of the issues. This must be a broad brush campaign about themes and values but also a campaign about facts.”