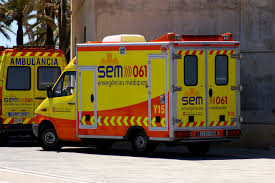 A SECOND emergency communication station is to be set up in Torrevieja.

As the fifth largest city in the Valencian Community, serving many of the outlining towns with its fire, ambulance, police and hospital services, a new centre is seen as a 'must' for the city. Last Friday Torrevieja's Mayor, José Manuel Dolón, held a meeting with Manuel Cava, manager of the Telecommunications Service of the Directorate General of Information Technologies and Communications of the Ministry of Finance and Economic Model of the Generalitat Valenciana.Cava came to Torrevieja to report on the positive decision made by the department to include the municipality in the expansion plans to be carried out on the Digital Mobile Communications Network and Security Emergency for Valencia (Red COMDES). The meeting was also attended by the Councillor for Security and Emergency Javier Manzanares and the Director General of the local police, Javier Minguez. The actual decision is to install a second base station in Torrevieja, as confirmed under an agreement signed on 17th September 2010 by the city of Torrevieja and the Generalitat Valenciana. That arrangement was to first look at the technical feasibility of improving the coverage of COMDES Network sites.The mayor said: "Torrevieja needs to have complementary emergency facilities that cover the entire municipal area, and an important part of our surroundings; to intervene in real time when an emergency or catastrophe may happen." The site has still to be chosen to allow enough coverage to all technical and specialized personnel in case of an emergency, so they can communicate without any problems. "Local police and fire-fighters, civil defence and other volunteer corps will benefit from the advantages to be derived from the new facility" Dolón added. “The new base station will ensure better coverage and reliability of the system, to be located in a plot of municipal property, in one of the highest areas of the municipality. The date that this begins to become operational will depend on the fulfilment of various requirements of a technical nature. If significant incidents do not occur it is expected to become operational within six months."The most obvious siting for the new facility is the former Municipal Headquarters of Torrevieja's Office of Tourism, which also looks set to become the HQ for the GRO Local Police unit. The restored building has been unused since 2012 and is set at one of the very highest points in Torrevieja with the adjacent water storage facility already housing numerous transmission towers, due to the advantage of line of sight and clean communication lines from this high point, which alsohas a direct line of sight to La Mata, across the lakes to Quesada and Los Balcones, Torrevieja South, both Hospitals, Fire and Local Police Stations and beyond.