A look into the different towns and villages on the Costa Blanca South: Ciudad Quesada 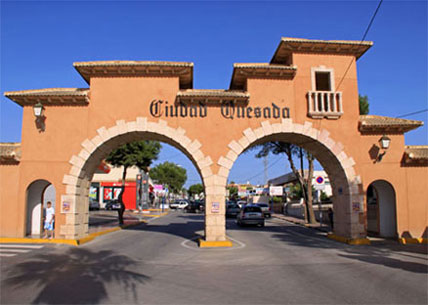 Ciudad Quesada is located on the Costa Blanca South just 8 kilometers north from the major town of Torrevieja.

Nearby towns include Rojales and San Fulgencio.

Getting to Ciudad Quesada from the nearest airports is straightforward, our Ciudad Quesada airport transfers page has all the options and prices for you.

Ciudad Quesada is inland from the coast so it may not be your first choice for a place to stay in – if you are looking for a beach holiday on the Southern Costa Blanca there are better choices.

Ciudad Quesada is an unusual town because it really didn’t exist until the early 1970’s when a Spanish entrepreneur called Justo Quesada Samper decided to start his own town. The urbanisation grew and finally it was accepted as a real Spanish town.

Ciudad Quesada is a popular place where many people live all the whole year round. It has plenty of shops, bars and Ciudad Quesada restaurants.

Ciudad Quesada also has a golf course and aqua park so it does have its own unique attractions. It really depends on what you are after for your holiday.

Many award-winning sandy blue flag beaches are just a few minutes drive away at Guardamar del Segura. The urbanisation is well-designed with good landscaped features. The views are good, inland you have mountains, the countryside surrounding Ciudad Quesdada includes orange groves and the salt lakes of Torrevieja.

There are no beaches actually in Ciudad Quesada as it is slightly inland but there are numerous excellent beaches close by. The nearest beaches are at Guardamar del Segura, La Mata (also known as Torrelamata) and Torrevieja.