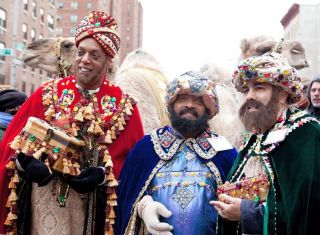 Starting at 5.30pm the Three Kings Parade, known as the Cabalgata de Reyes Magos will travel from the Plaça Jaume II, along Avenida País Valencià and Calle Mayor, finishing at the Town Hall where they will present gifts to the children.

In La Mata the Kings can be seen in the parade which starts at 5.30pm on Avenida de los Europeos. It will travel through the main streets before ending at the Nuestra Señora del Rosario Church, in the Plaza de Encarnación Puchol, where everyone will be able to take photos of themselves with the Kings. Afterwards, everyone will be invited to kiss the hand of the statue of the baby Jesus and visit the Nativity in the church.

The traditional Parade leaves from Colegio Playa Flamenca (IES Playa Flamanca) in Calle Nicolas de Bussi down to Calle Salvador Dali and along to La Zenia Boulevard, starting at 5pm

In Pilar de la Horadada the Three Kings Parade will depart from the Parque 30 de Julio at 5pm before travelling along Calle Mayor to the Plaza de la Iglesia.

The parade starts from the medical centre and goes to the church where the kings make their offering. They then go to the Capitol Theatre to present the presents to the children. If any boys and girls want to take part, they're welcome but they should be dressed as shepherds or similar and be at the start at 6pm.

19:00 Three Kings will Parade in San Fulgencio outside the Cardenal Belluga Theatre where the gifts will be handed out.

Melchior, Caspar and Balthasar, will be arriving in Torrevieja at 5pm in the port, where they will be welcomed by the mayor. They will then travel along the Dique de Levante towards the “Monumento al Hombre del Mar”, along calle Ramón y Cajal, Zoa up to calle Ramón Gallud, and finishing at La Iglesia de Inmaculada Concepción, in the plaza de la Constitución where there will be a reception by the students of the local school of theatre