Why Spain loves the Three Kings 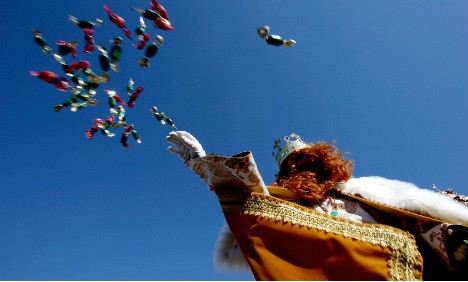 The Epiphany is traditionally Spain's main festive holiday, when children receive their presents brought not by Santa Claus, but by the Three Kings.

Kings are cooler than Santa

In a 2015 survey, Spanish children overwhelmingly chose the Three Kings as their favourite gift giver (67 percent) over Santa Claus (27 percent).

In Spain ‘Los Reyes Magos’ - Melchior, Caspar and Balthazar - play a similar role to Santa Claus in many other parts of the world. Spanish children write letters to the Three Kings, or Three Wise Men, who then bring the children gifts the night before, or on the morning of the Epiphany, January 6th.

In some houses children leave their shoes outside the door so that the Three Kings will fill them with gifts, often leaving bigger presents alonsgide.

Huge Three Kings parades or ‘cabalgatas’ are held around Spain on January 5th. They are huge spectacles featuring hundreds of actors and are broadcast live on Spanish television.

One of the biggest, in Madrid, draws crowds of 100,000 people, including thousands of children eager to catch the sweets thrown into the crowd by the three kings themselves.

This year Madrid’s parade starts at 6.30pm in Nuevos Ministerios, from where it will process into the centre of the city, ending in front of the city hall at Plaza Cibeles at 8.45pm.

In Barcelona, the Three Kings will arrive by boat at the city’s port where they are greeted by the mayor, Ada Colau at 4.30pm.

The procession will begin at 6pm on avenida del Marquès de l’Argentera and weave its way through central Barcelona, ending at 9.30pm at the magic fountain of Montjuïc.

The oldest Three Kings parade in Spain has taken place in Alcoy, Alicante since 1885. This year it will start at 6pm and end with a huge fireworks display in the centre of town.

The roles of the Three Kings in the famous parades have traditionally been played by city councillors. Because most are white, Balthazar has usually been played by a "blacked-up" white man, which has often been branded as racist by critics.

This year, however, Madrid’s left-wing council has called time on the controversial tradition, promising to employ a black actor for the part "to reflect the integration and diversity that increasingly characterizes Madrid’s community."

Traditionalists are furious this year at the decision by some Madrid town councils to replace a King in the parade with a Queen, all in the spirit of equality.

On January 6th, Spaniards typically tuck into a Roscón de Reyes, a Three Kings cake baked in a ring and decorated with candied fruit and hiding a, sometimes lucrative, surprise. A small figurine of the baby Jesus, or a little toy for children, is typically hidden inside the dough, as is a dry fava bean. Whoever finds the toy is crowned king or queen of the celebration, while the one who finds the bean has to buy the Roscón next year.

Some bakeries have taken the hidden surprise to extremes this year. A Madrid bakery has hidden a diamond in one of its Roscón cakes, that it bought in a "prestigious jewellery shop in Madrid" according to its owner.

Another bakery in La Bañeza, León, has hidden a cheque worth €7,000in one of its Roscón cakes - which would be a sweet surprise for someone to find in their slice on January 6th.

Might the three Kings originally have come from Andalusia? The last Pope thought so.

In his 2012 book Jesus of Nazareth: The Infancy NarrativesPope Benedict XVI claimed the gift-bearing trio came from Tarsis – or Tartessosa – a kingdom that historians place somewhere between the provinces of Huelva, Cadiz and Sevilla.