PREPARING FOR THE EASTER PROCESSIONS 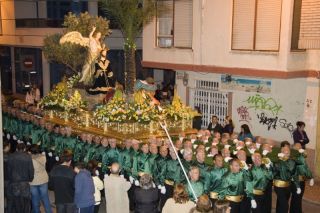 Would you like to take part in the Holy Week (Semana Santa) processions in Torrevieja?

Christmas and the New Year celebrations may only just be over but already the thoughts of the International Cofradia in Torrevieja are turning to preparations for this year’s Easter processions during Holy Week.

Each year the cofradia needs to recruit around twenty new costaleros. Becoming involved in what is a brotherhood in the true sense of the word offers a unique opportunity for integration to those of us living in Spain and to take part in what is a truly magnificent cultural and religious event.

All of those who have taken part in the processions in the past have found it a very moving and emotional experience not least because of the pleasure it has given the residents of Torrevieja to see the paso being carried so proudly when for years before the International Cofradia was formed it had to be driven through the streets on a lorry chassis rather than being carried.

The first get together of the International Cofradia will be on Thursday evening, February 11th starting at 7.30 pm in the hall adjacent to the Semana Santa Museum behind the Chinese restaurant on Avenida Baleares in Torrevieja. Even the most experienced costaleros need to get ‘back into the swing’ of carrying the float and inevitably with the numbers involved there are usually some who are unable to carry.

This provides opportunities for new recruits to take part and they of course need to be taught the unique marching steps which when properly carried out actually help ensure the weight is evenly distributed and more manageable. This first meeting though is simply a meeting for the registration of those who are going to continue carrying the paso this year and to welcome any new prospective members.

The International Cofradia takes part in two of those processions, the first being on Monday evening March 21st and the second being on Friday evening March 25th. The processions during Semana Santa in Torrevieja have been officially declared by the province of Alicante to be of special interest for tourists and thousands visit the town to watch, lining the streets of the town to see the pasos pass by.

We are always a little unsure at this early stage of proceedings how many existing costaleros will be available to carry this year and so if you are interested then please come along to attend the first meeting and find out a little bit more about what it is like to be a costalero and what it involves. If you want any further information you can also telephone David McLachan on 966 700 056.