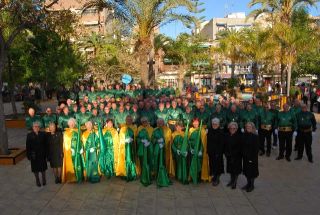 DAVID MCLACHLAN was the rather special guest speaker at the January meeting of the Orihuela Costa Branch of The Royal British Legion, where he spoke to members about the origins and the workings of Torrevieja’s International Cofradía, Los Costaleros of Oración del Huerto.

He was supported by five branch members, all of whom are long time members of the fraternity, and all of whom took to the floor, resplendent in their ceremonial attire.He explained that the International Cofradía is a company of international residents, both men and women, who live in the area. The majority of the group are British, but they are supplemented by Russians, Ukraines, Scandinavians and many from the continent of South America.They number in excess of 100 people who have the task of carrying a large paso, or float, depicting Jesus in the Garden of Olives, at the Torrevieja Easter processions. David explained about the origins of the International Cofradía and how it was first formed prior to the Easter Celebrations in 2004.Prior to the formation of the International Cofradía the paso was shunted around the streets on a motorised frame, and a number of modifications were required to the structure so that it could be carried, rather than rolled.Accompanying the float is the Ladies Section of the International Cofradía who walk alongside the paso dressed as penitents or Nazarenes. This year, the cofradía will take part in two of the Easter processions, the first on Monday evening March 21st and the second on Friday evening March 25th.As with any large organisation, there is always a need to recruit, and 2016 will be no different from any other year. David explained that the organisation is open to all and it will probably need in the region of 20 new costaleros.So, if you would like to find out more about the costaleros or become involved with this most prestigious event, please contact David on 966 70 00 56, or by email at davidmacspain@gmail.com.The first get-together of the International Cofradía will be on Thursday evening, February 11th, starting at 7.30pm in the hall adjacent to the Semana Santa Museum, behind the Chinese restaurant on Avenida Baleares, in Torrevieja.