MORTGAGE NEWS: Eurozone mortgage base rates below the official cost of money 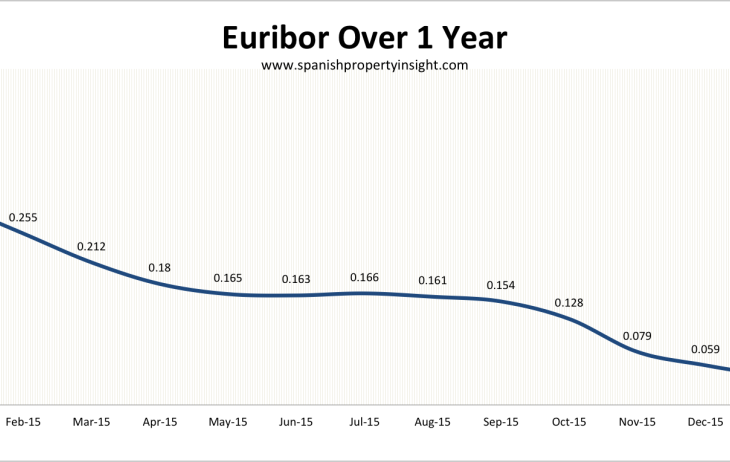 Eurozone mortgage base rates moved below the official cost of money in January for the first time in history.

12-month Euribor – the rate used to calculate most mortgage repayments in Spain – came in at 0.042% in January, the lowest rate on record, and down 86% compared to last year. On a monthly basis Euribor was down 29% compared to December 2015.

All of which is good news for homebuyers in the market today in Spain, at least those who qualify formortgage financing in Spain. There has never been a cheaper time to finance a property purchase in Spain, with house prices at or near the bottom of the cycle. The risk lies in borrowing too much today on the assumption that interest rates will always remain low, which they probably won’t.

It is also good news for existing borrowers with an annually resetting mortgage (and no floor clauses), who will see their mortgage payments fall by around €13 per month for a typical €120,000 loan with a 20 year term.

Euribor has been below 1% since June 2012, but Euro interest rates were not always so low. Back in July 2008 they peaked at 5.393%, and in the decades before Spain joined the Euro, interest rates above 10% were common.

New data from the Bank of Spain reveals that the value of all outstanding mortgages in Spain fell to the lowest level in a decade last year, as Spaniards paid down their debts or mortgages turned sour.

This all means that, although the amount of new mortgage lending is growing, existing mortgages are being retired at a faster rate, so the overall Spanish mortgage book is shrinking, with an impact on the balance sheets of mortgage lenders in Spain.