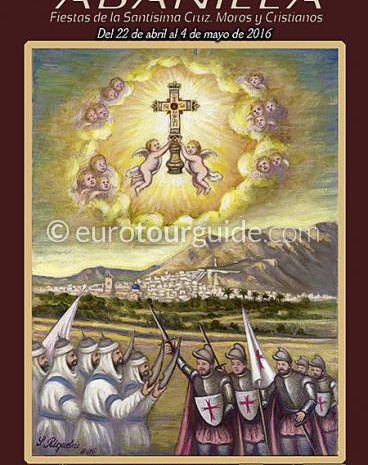 The Moors and Christians will be marching in Abanilla on Sunday 1st May, although the fiesta actually starts on the 22nd April and continues until the 4th May 2016.

Abanilla is situated inland from Orihuela and between Fortuna and Hondon de las Frailes. Although it is a relatively small municipality it has large programme for its annual Moors and Christians Fiesta. Many of the Moors and Christians associations from all over the Murcia Region join in the celebrations in Abanilla making it of Regional Tourist Interest.

20:00 Music Parade by the Brass Bands

20:30 Brass Band Concert in the Auditorium

11:00 Farewell ceremony for the 2014 Fiestas Queens in the Auditorium Municipal.

21:00 Opening Speeches and the Coronation of the Fiesta Queens in the sports centre 'Pascual Saurín Cutillas' on Avda. Región de Murcia

23:45 Embassy of the muslins in the Plaza de la Constitución

11:00 Brass Band Parade from the Iglesia

18:00 Flower Offering to the Santisma and the Vera Cruz accompanied by the music band Los Veteranos starting from the Plaza de la Constitucion.

06:00 Diana, early morning parade by the music bands and the Captains of both armies to the Iglesia.

07:30 Holy Mass followed by a Pilgrimage from the local church to the Hermitage of Mahoya.

As the procession arrives in Mahoya, the Holy Cross is raised and a paper ball called a 'Granada' is suspended from the balcony of the Hermitage. The captains wave their flags and the harquebusiers shoot their blunderbusses. Then the Granada Paper ball is opened and the doves inside are released, at the same time a jet of water is sprayed from the Cross. Then a Holy Mass is celebrated in the Hermitage after which all the pilgrims can kiss the Cross.

17:30 Octava Procession followed by the closing of the fiesta with the waving of the flags and the firing of the Blunderbuss guns followed by a firework display from the Plaza de la Constitucion.