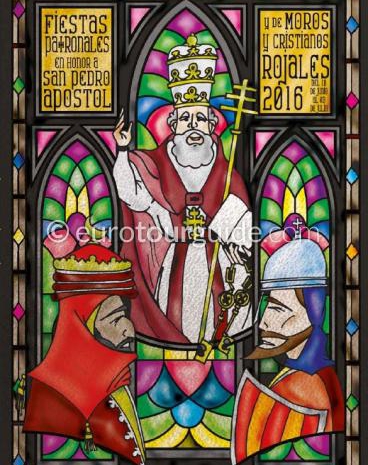 21:00 Presentation of the Captains and Flag Bearers in the Capitol Theater

12:30 El Chupinazo, rocket to announce the start of the Fiesta in the Plaza de Espana

21:30 Correfocs (hand held firework parade) from the Plaza de Espana finishing at the Hoguera on the corner of Calle Maestro Jose Serrano and Calle Maestro Ventura.

20:00 Flower Offering Parade from the Centro Salud in Rojales

All day the Giants and Big Heads parade around the streets accompanied by the dulzainas (little clarinets) and drums.

09:00 Parade by the La Lira Music Band through the streets of Rojales.

21:00 Solemn procession with the statue of San Pedro followed by a magnificent firework display.

20:00 Firing of the blunderbusses from the Plaza beside the Archaeologica Museum followed by the act of the taking of the castle and speeches by the Berebers and the Contrabandistas.

22:30 Carnival Parade with the participation of the Moors and Christians.

21:00 Grand Parade of the Moors and Christians.

21:00 Grand Parade of the Moors and the Christians, followed by the closing speeches for the fiesta.