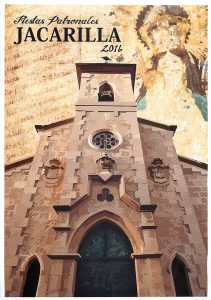 The town of Jacarilla will be in fiesta from the 26th August to the 8th September 2016 as they honour their patron saint the Virgen de Belen. The programme includes parades, concerts, flower offering, traditional ribbon race, partying, fancy dress parade and fireworks.

Friday 26th August
20:30 Opening of the fiesta with fireworks in the Plaza del Ayuntamiento.
20:35 Parade of the music band to collect the Fiesta Queens.
21:35 Coronation of the Fiesta Queens and Inaugural Speeches at the Recinto de Fiesta.

Sunday 28th September
21:00 Grand Entrance Parade of the Music bands from the Ayuntamiento.

Saturday 3rd September
20:00 Fancy Dress Parade through the streets of the town.

00:00 Solemn Serenata in honour of the Virgen de Belen in the Plaza de la Iglesia.

20:30 Solemn Procession in honour of the Virgen de Belen, followed by a fireworks display.