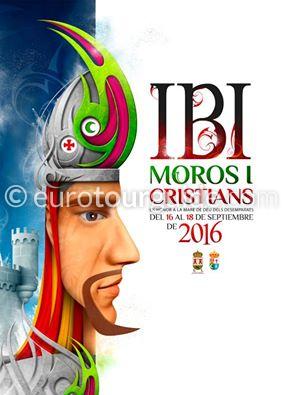 Ibi will be enjoying their Moors and Christians Fiesta from the 16th to the 18th September 2016. The fiesta is held annually at the beginning of September in order to honour their patron saint, the Mare de Deu dels Desemparats. The full programme in Spanish is in the brochure below, the highlights are:

19:30 Mass followed by the Opening Speeches for the fiesta, the playing of the National Hymn and then a parade by music bands of each troop.

00:00 Nit de l'Olla, after the official dinners all of the troops will parade through the streets until 02:30.

Saturday 17th September
08:00 Diana, ringing of the church bells followed by parade by all of the troops and music bands.
11:30 Children's Parade of all of the troops starting in Calle Murillo.
17:00 Firing of the Arcabuceria Guns from Calle Doctor Waksmann to the Castle in Carrer Les Eres.
18:30 The Moorish Embassy starting in the Placa de I'Esglesia and finishing at the Castle.
21:00 Flower Offering at the cross roads between calles Joaquin Vilanova and calle Murillo.

18:00 The Christian Embassy at the Castle in Carrer Les Eres, followed by the presentation of the Captains for each troop for next years Fiesta.
20:45 Solemn Procession of all of the troops with the statue of la Mare de Due dels Desemparats, starting from the Placa de l'Esglesia along the usual route, followed by a firework display.