Halloween on the Costa Blanca 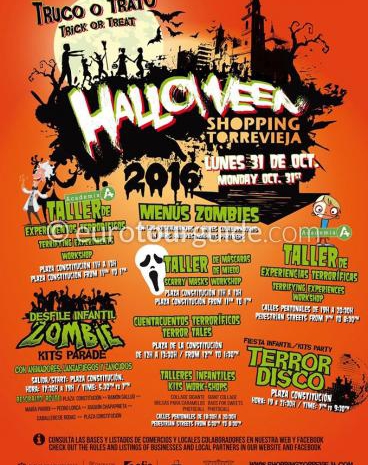 There will be a Halloween Parade in San Miguel de Salinas on the evening of Friday 28th October 2016. The fancy dress parade will start at 21:00 from the Town Hall and there will be hot chocolate at the end of the parade for everyone in a scary costume.

Bigastro will be celebrating Halloween on Saturday the 29th October 2016 with an evening of terrifying fun!! There will be a Fancy Dress Parade at 18:00 from the Auditorio Francisco Grau finishing in the Plaza de la Concordia where there will be Terrifying Stories and a Photocall.

Dolores will be celebrating Halloween from the 29th to the 31st October 2016. During these dates the Cultural Centre will be transformed into a Terrifying Tunnel of Terror. There will be several opportunities to enter the Tunnel and a specific time for children to experience it.

17:00 Tunnel of Terror for children

There will be a Terrifying Fiesta in Gran Alacant on Saturday the 29th October for Halloween. Starting at 18:00 in the Centro Comercial there will be a Fancy Dress Competition, Face Painting, Photocall, Music, Games and Entertainment.

There will be all sorts of Halloween activities in Torrevieja on Monday the 31st October 2016. Starting in the morning and continuing until the evening they will all take place in the Plaza Constitucion, unless otherwise stated.

Benijofar will be celebrating Halloween on Monday 31st October 2016 with an evening of Trick or Treat fun!! There will be a Fancy Dress Party in the Plaza de las Verbenas from 18:00, with a got chocolate and sweets for everyone in fancy dress as well as a photocall and other scary surprises!

There will be a Halloween Fiesta in Rojales on the evening of Monday 31st October 2016. From 18:30 onwards in the Malecon del Soto there will be all sorts of scary activities including terrifying face painting, monstrous cupcakes, spiders, mummies, ghosts and more. There will also be a Tunnel of Terror for 3€ in the Capitol Theatre from 17:00 until 23:00.

There will be scary activities in Pilar de la Horadada for Halloween on Monday the 31st October 2016. From 18:00 until midnight in the Plaza Campoamor there will be face painting for both children and adults, a photocall, trick and treat bags, a sinister laboratory, and witches wart popcorn!! Added to this, the Cine Duplex will be showing 4 Horror films back to back from 22:00 until dawn.

There will be a Fancy Dress Parade in Catral on Halloween. The parade will leave the Parque de la Libertad at 19:30 on Monday 31st October 2016. Everyone is welcome to join the parade as long as they are wearing a scary costume. There will also be a 'Tunnel of Terror' along Calle Victoria.

Be terrified in Guardamar del Segura on Monday 31st October 2016. From 20:00 to 23:00 the Tunnel of Terror through the Alfonso Natural Park will be open for a frightful experience. The Tourist Train will be making circular routes through the town from 18:00 until 21:30 to collect ‘victims’ who want to pass through the tunnel.