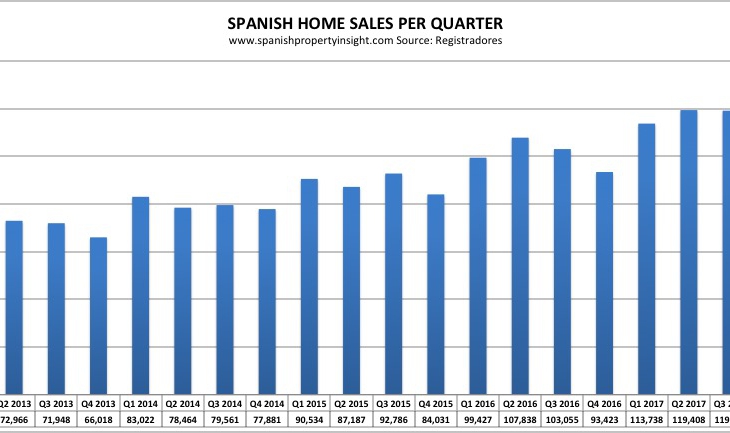 Spanish home sales in the first quarter were the highest they have been since the market turned the corner towards recovery in 2014, and growing foreign demand contributed to the increase, led by the British.

There were 128,990 Spanish home sales inscribed in the Land Register in the first quarter of the year (chart above), an increase of 13.4%, according to the latest property market report just released by the Association of Spanish Property Registrars, known locally as the Registradores.

“This volume of quarterly sales was the highest in the last thirty eight quarters, and you would have to go back to the third quarter of 2008 to find a bigger figure,” explain the Registradores in their latest report.

Foreign demand hit a high of 16,833 purchases in Q1, up by 13.2% compared to the same period last year. Spanish property is clearly still seen as a good investment by buyers from all over the world, led by the British.

Despite the increase in buyers, as a percentage of the overall Spanish housing market foreign demand remained at 13% of the market due to a slightly bigger increase in local demand.

UK nationals purchased more homes in Spain than any other foreign nationality in Q1 2018, with 2,451 acquisitions in the period, followed by the Germans with 1,316, and the French on 1,290. As a result, the UK’s share of the foreign market was 14%, followed by Germany and France with just above 8% each. So even after Brexit, the UK market is still almost double the next biggest market, and bigger than Russia, China, and Italy combined. That said, 44% of buyers came from the “rest of the world” in a sign of the increasing global diversification of demand for property in Spain.

Demand from Bulgaria grew the most, up 16%, followed by Morocco, the Ukraine, and the “rest of the world”, which contributed the biggest increase in foreign buyers in absolute terms with more than 600 more buyers, followed by the UK with 301 more buyers, up 14%. I’ll analyse British demand in more detail in the light of Brexit in a separate article.

At the other end of the scale purchases by the Swiss were down 15%, and by the French down 10%.

Switzerland is a small market of around 150 purchases per quarter, so a small change in buyer numbers can deliver a high percentage change and we can’t read too much into one quarterly decline, though generally speaking sales are about 10% down from 2016 when the Swiss Franc was incredibly strong against the Euro.

France, on the other hand, has traditionally been the second biggest market, and a decline of 10% is noteworthy. What might be the cause of this double-digit decline whilst almost all other markets are growing? I suspect the answer has something to do with the constitutional crisis in Catalonia, a Spanish regions that borders with France, where the French have long been the biggest group of foreign buyers, with 43% of the foreign market for second homes, according to the latest figures from the Association of Spanish Notaries. The Catalan separatist drive to break away from Spain has shattered foreign confidence in the region, and some developers in Barcelona I have talked to report their foreign clients have vanished since the crisis erupted with a disputed referendum last October.

The Registradores do not say how foreign demand breaks down by region, but it is likely that all regions have seen an increase in buyers from abroad, with the possible exception of Catalonia